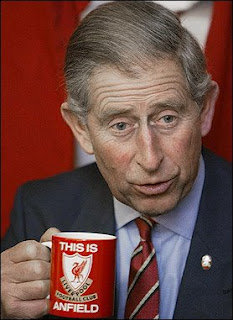 Doc Barbara asked to meet Prince Charles who, as we all know, made a recent triumphant appearance on television as a weather forecaster. After she had witnessed his charismatic professionalism, she challenged him to a biscuit-dunking competition as a sequel. Both would be equipped with their own personal mugs filled with Doc Barbara's favourite Earl Grey: he would immerse a Duchy of Cornwall biscuit therein and she her Rich Tea (each in his/her own mug, of course.) An impartial judge with a stop-watch would measure which lasted the longer without disintegrating (the biscuits not the contestants.)

As Prince of Wales, he declared himself honoured to accept and visit idyllic Monmouthshire, birthplace of Henry V, for this historic occasion. However, they both became so involved in animated discussions about frogs (see below) that they ate their entire packets in one go without dunking. "Oh dear!" said HRH wistfully, "Mummy may be disappointed that I have been naughty and consumed the main treat for her Jubilee tea, but I have so enjoyed my Royal Self this afternoon." The contest was declared a draw and a further one arranged for an indefinite date in the future.

A young frog on one of Doc Barbara's new circular tea bags. 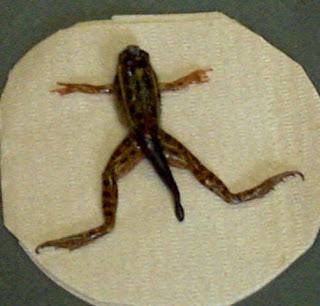 Posted by Barbara Daniels at 07:34 No comments: 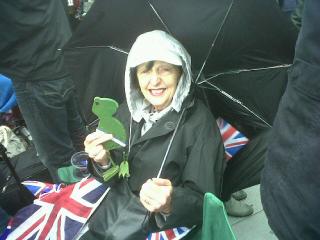 It has come to our attention that Doc Barbara, concerned for wildlife as always, is deeply troubled about the lack of frogs in her pond this year: "Normally there is a mass of spawn followed, according to Mother Nature's eternal decree, by tadpoles and froglets, but this year my pond is barren," she reports.  "I have done everything, given them tasty morsels to eat and sometimes sat by the pond all night under my umbrella to support them in multiplying.  But to no avail.

Finally, I asked a neighbour to give me two frogs of, I hope, different genders.  I placed them in turn on one of my new circular tea bags to give them a soft springboard into the pond. After all, I learned so much from my attendance at the World Diving Cup Finals.  It was a crisis and, at such a crucial moment, I believe in decisiveness: I always bite the bull by the horns."

Editor's note:  Here we have another of Doc Barbara's felicitous mixing of aphorisms for dramatic effect but I have one query. Is it just me or is there a problem of scale on the photograph?
Posted by Barbara Daniels at 07:29 No comments: 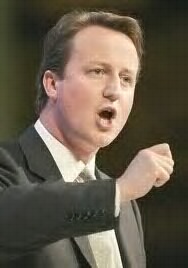 Guest editorial by David Cameron as dictated to our cub reporter:

When I first conceived my concept of the Big Society, I had no conception that I would find anyone who defined it as well as does Doc Barbara.   In fact, I am greatly relieved that she has defined it as I was having some difficulty defining it myself, particularly when asked.   Doc Barbara is Big in every way except where she is Small: Big Ideas, Big Achievements, Big Courage, Big Feet - sorry, Big Feats.  Where was I?  Ah - yes - stuck for ideas, that's where I was.  That is where I always am.  But - it is important to carry on even when stuck and that is what Doc Barbara represents: "Never stuck up, always stuck in" - and carrying on.   She does carry on - and how!  I approve of that and urge her as I have always urged you all, continue to urge you and will always urge you to: Carry on Doctor.

Editor's note: Humph
Posted by Barbara Daniels at 01:13 No comments: