CAN SHE OR CAN SHE NOT? 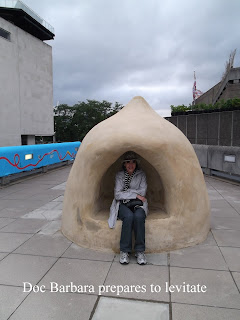 Doc Barbara is resolutely set against allowing undue adulation amongst her many fans but, recently, one of the leading members of the W.U.G.(Women's Undomesticated Group) opined that, if she tried, our local heroine could levitate from a special pod erected for that purpose.  In the true spirit of the legend of King Canute, Doc Barbara agreed to undergo the experiment, with the aim of proving that she does not have supernormal powers, "I never bite off more bullets than I can chew," she stated enigmatically to our cub reporter. Yet afterwards the pod was mysteriously empty.

Someone else was observed waiting for her to descend.. 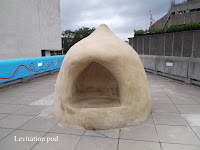 Posted by Barbara Daniels at 09:15 No comments:

Doc Barbara is a strong proponent of law and order even though she has been accused by her few detractors of spreading the reverse. On a recent visit to a market town, she observed a person, archaically dressed, with a wild-eyed look and a sword in hand. Clearly this individual was about to break the window of a nearby greengrocer and so Doc Barbara nobly and featly sprang to the rescue.

Holding his or her arm - it was not immediately apparent which - she spoke firmly yet soothingly and led him/her to a place of greater safety. There she sent for a flagon of local water, told many funny yet uplifting stories and reassured passers-by: "It was just a sheep in knight's clothing." 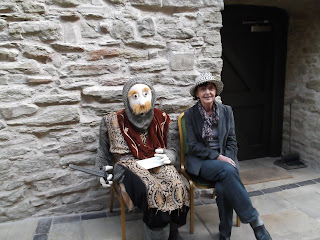 Editor's comment: How is our small town to live up to the stirring example of Doc Barbara?  Not only do we revere her heroic deeds but also her turn of phrase which adds poetry and further inspiration to the event.

Note by the reporter of The Brynbuga Beagle: I assume Doc Barbara is the one on the right.
Posted by Barbara Daniels at 23:54 No comments: