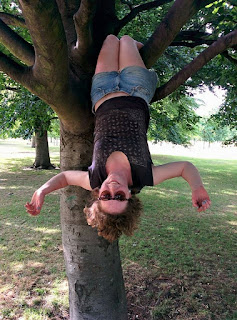 Doc Barbara has reconsidered her mission to curb the slug proliferation which has occurred after our unusually mild winter. She realised that there is little hope North of Wigan: it is virtually impossible to prevent a hermaphroditic slug from mating with itself once it has fallen in love. Her poem on geographical variations in slug libido is scientifically accurate as well as deeply emotive.

She decided to concentrate her efforts South of that latitude and try to persuade these gastropods to contain themselves, or not as the case may be - if you see what we mean. Professor Ramsbottom-Thrutch is delighted as this is his native area and he feels at one with natural creatures in Lancashire. [All this unity is getting complex and a little unseemly: Ed]

The difficult starting point was to find slugs with which/whom to start the anti-sex propaganda but Bob Twaddle said his sister, Belinda, would be thrilled to assist. Here she is helping out.

We did wonder why she is in this posture and eventually found the explanation. She is energetic and devoted to whatever enterprise she undertakes but, as we saw previously, tends to lose focus. One of her prime intellectual interests is philology and Bob had told her that the words "slug" and "sloth" were connected in Proto-Indo-European because of their shared sense of torpitude. [I myself am beginning to lose the will to move: Ed]

It is amazing that Bob uttered these words since he has a phobia about polysyllables, made all the worse when he recently discovered that his parents nearly named his sister Roberta, whereas he has to make do with one phoneme. [Such psychological neuroses bedevil the office of The Monmouthshire Mouthpiece and now we have an acrobat as well: Ed]  Belinda therefore took it upon herself to imitate a sloth in her inimitable enthusiastic manner in order to form bonds with the creatures [Here we go again! Can no-one round here stay single? Ed] It may take a while for her to work her way down from Lancashire.

When told of these developments, Doc Barbara was pleased with our speedy response: "Procrastination is the thief of jam tomorrow," she opined. Although we may seem to have diverged from our original target (and some of you may be irately contemplating slug damage in your garden at this moment) we can assure you that the matter is in hand and Belinda will soon be coming to a tree near you.
Posted by Barbara Daniels at 23:52