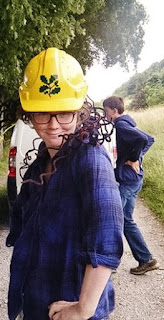 Firstly let me, as Editor, apologise for the asides which crept into our last article about Doc Barbara. The Chief Reporter has a new mobile device with something on it that he seems to refer to as Piri-Piri which picks up his voice and everyone's inner thoughts (although it is possible I mutter aloud when particularly frustrated). He refuses to turn it off and so I suppose we will all have to adjust. Professor Ramsbottom-Thrutch will find particular difficulty as he is prone to voice his sorrow at deeply emotional moments to avoid fits of weeping. Sometimes life on a provincial newspaper can be acutely stressful.

Yet the good news is that we have now returned Belinda Twaddle to her normal vertical posture by explaining that there is a difference between a sloth and a slug. You will recall that she offered to assist in the attempt to prevent slug proliferation South of Wigan. We are delighted to report phenomenal success here with most slugs persuaded by peaceful means to refrain from sexual activity even after the long wet winter. Belinda heroically established a network of anti-slug-sex (A.S.S.) wardens equipped with the special apparatus she is wearing here. Her brother Bob is holding his back in agony after bending to communicate with too many slugs. [Hoist with his own trumpet, poor man: Doc Barbara]

She found that slugs respond to music and so played them arias from Cosi Fan Tutte, thus making the females feel that their romantic activities were commonplace and vulgar. These extracts could be whistled if the wardens forgot their gadgets or can be relayed from wires such as Belinda carries with her on her helmet at all times. The opera has had the added bonus of lightening our Professor's mood: he has been seen to smile and even chortle on occasions. Belinda will soon dare to speak to him about Roman burials.

The slugs then give up all sensations of passion and retreat to their [Where DO they live? Ed] homes in pensive but celibate mood. [I feel an outburst of racking sobs coming upon me. Professor R-T] This method has produced success everywhere but in Yorkshire. [You can tell a Yorkshire slug anywhere but you can't tell it much. Ed]
Doc Barbara, when informed, opined, "He who laughs last has a bird in th'hand." [Clearly the mention of Yorkshire has unsettled her. Ed]

Belinda has now decided that the enterprise can be taken beyond Wigan to the recalcitrant Northern hermaphroditic slugs. Her public-spirited determination knows no bounds. [Worse luck. When can we get back to reporting the doings of the W.U.G? and their weekly acrimonious meetings? Ed]

Posted by Barbara Daniels at 04:05