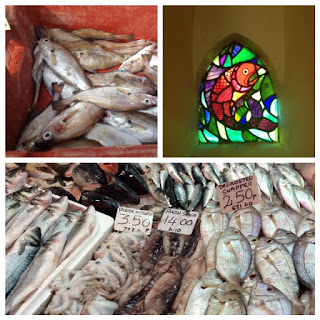 Professor Ramsbottom-Thrutch (sociologist) is a cautious and scholarly man and so, before investigating the Doc Barbara phenomenon in full, he decided to consult a renowned colleague in the psychology department to delve more deeply into the inner make-up of our heroine (we all know she never wears outer make-up).

The psychologist reported the outcome of his tests to her and then we heard nothing. Finally, she rushed into the office of The Monmouthshire Mouthpiece several days later to tell us the result. She caught us all by surprise and so everyone was present.

"He says I have too much super-ego, a normal ego but too little squid," she declaimed. "I have been all over Europe to track down squid or even octopus, wondering if it was such a creature commemorated for its importance in a stained glass window in France - but I eventually found some in Brixton market." It appears she ate enormous quantities before sensing that her internal mental mechanisms were unaffected - although other systems suffered.  We advised more cake in lieu.

Our chief reporter, a man of wide learning, usually unaccountably absent when she is our topic, explained to her what he thought was the error. The picture below shows the delight of both Doc Barbara and the Professor of Sociology at the happy ending of this fabulous exploit (although he appears to be holding her back in fear that she might leap into the lake in search of more piscine delicacies. She does have a squid - sorry id - tendency to dive into water). "I thought quite early on I should have told the psychologist to stop bleating about the bush," she  opined merrily as she left. Her creative way with old sayings is proverbial. 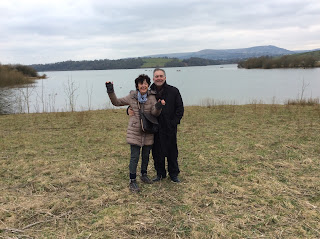 Posted by Barbara Daniels at 00:15