Happy Christmas to the followers of The Monmouthshire Mouthpiece
Some time ago - our dedicated readers will recall - Doc Barbara invented a nositwhatsit, a ribbon that fixed a pin to the wearer's posterior and induced she or he to keep walking rather than lounging and therefore perform the daily number of steps required to maintain a healthy heart.
Since Doc Barbara has a weakness for Christmas cake and pudding with immense helpings of brandy butter (the size of the photo indicates her appetite for these delicacies and the figurine is agog in admiration) ..


she invested in a more sophisticated device which clips inside the bra or on a waistband and counts the number of steps taken - she is not prepared to show it because of her dislike of advertising. She attached this gadget inside her substantial underwear and went for a ten-mile walk. On her return the new whatsit was missing. With a heavy heart (though a healthy one) she retraced her steps gazing at the ground as she did so and apologising distractedly to the many pedestrians she knocked down and dog owners over whose leads she tripped. She was so engrossed that she said "Sorry" to 5 lampposts, one with a dog ... [Censored: Ed}.

To no avail.  She asked Belinda Twaddle to go in search as she was expiring with exhaustion and perspiring with [We don't wish to know that: Ed.] ...  and this obliging girl did find a small and unusual object. The two of them decided it was not the original whatsit although they confused the issue by discussing what that whatsit was if not THE whatsit. To their astonishment the app on Doc Barbara's phone showed the extra mileage and the 2 of them deduced with Holmes-like rapidity that the true whatsit was still on Doc Barbara's ample person. 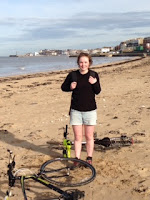 Together they decided that Doc Barbara first take off her jacket, do 100 steps and check. Hurrah - they were recorded.  She then removed her skirt: ditto. Her cardigan: the same; Her jumper: similar. Now the underskirt: phenomenon repeated.  Tights; result once again. Identical with thermal body layer. As Doc Barbara stood in her scarlet vest and interlock knickers Belinda fainted from the endeavour and - in putting her into the recovery position - [Can one ever recover from that? Ed.] - Doc Barbara's whatsit fell out of her capacious camisole.
The pair decided to desist from further walking and refresh themselves but the ferocious and disapproving squint on the face of Father Christmas was more than they could face after their ordeal and so ...

Posted by Barbara Daniels at 00:45

You've invented two news sports - Strip Walking and Find the Whatsit! There could even be a third game, What's This Whatsit?