Doc Barbara and the Exploding Porridge 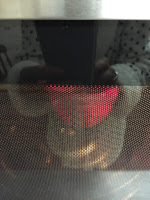 Doc Barbara, without being a health fanatic, always pays due attention to her diet and exercise regimes. Recently she decided to alter her morning repast and bought a microwave oven to make nutritious porridge swiftly and easily.
She took great care to stand back from the appliance whilst it did its important work as she has never quite rid herself of her anxiety about the direction of its waves: if they were to stray outwards, they might mistakenly cook her liver. In addition, she hid under the table exactly as she recalls doing in the War during a bombing raid and felt much safer there.
When questioned she opined: "There is no such thing as a free omelette." Her erudite wisdom is a lesson to us all.

However, on the first occasion, she was dismayed to find that the porridge had exploded out of its special container. This disaster confirmed her worst fears about microwaves and she once more retreated under the table to consult the Internet and Belinda Twaddle by phone about the best course of action. 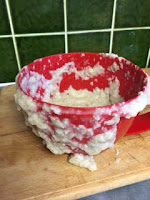 Firstly, she typed "Exploding Porridge" into the search engine and was agreeably surprised to see that expert help was immediately to hand.

However, she had some considerable difficulty in interpreting the equation on the board with respect to her prospective breakfast but, with extreme good fortune, Belinda arrived at that moment of quandary, persuaded her to emerge from under the table and gave her the rational and scientific explanation, the fruits of her hasty research. 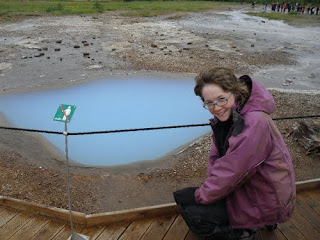 Belinda had spent the brief interim contemplating porridge-like locations and had concluded, putting together all the evidence, that what is crucial to the enterprise is the RELATIVE amounts of oats and water. She and Doc Barbara tried again according to the suggested mathematics and the result was perfect - a delightful bowl of the precious substance upon which could be sprinkled cranberries to taste. As Doc Barbara summarised: "You can't step into the same river twice with a sow's ear." 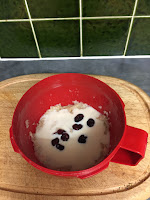 Posted by Barbara Daniels at 22:46