Our regular devoted followers of Doc Barbara's adventures will be acutely and sorrowfully aware that her friend, Professor Ramsbottom-Thrutch (who came to write a sociological study of her unique case) had been prone to semi-paralysing bouts of emotion. Even though social scientists should be detached from their topic, he would well up copiously when lecturing on Roman burial practices if the deceased were under 60 - or diseased.
Clearly something had to be done and his sojourn with us at our newspaper office has done much to restore his equilibrium. Yet Belinda Twaddle decided that she could help even more. 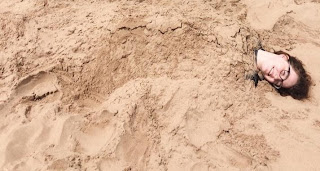 Here we see her offering the Prof. a variant of immersion therapy whereby he could observe a mock burial which turned out for the best. Shortly after our cub reporter took this shot (relief all round that he didn't inter himself as well as he is not the shiniest pebble on the beach) she jumped up, since she was only lightly covered with sand, danced with joy and encouraged the Prof. to join her merriment. This he did and their joyful ritual of renewal was noted by a small but rapidly growing crowd of bemused holidaymakers.

The next step
She then took him to a museum where she instructed him to gaze at relics of Roman burials for 2 hours until he became inured: this was so amazingly efficacious that she had difficulty dissuading him from opening the sarcophagus and entombing himself. He explained that he had misheard and thought she said "immured." (We wonder in our darker moments if he simply became so bored that he lost the will to live let alone expatiate on funeral rites in the Ancient World.) 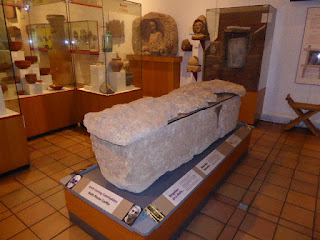 The result
All doubts and fears were thus put to rest (R.I.P. Anxiety) and we held a celebratory party to mark the occasion: Professor Ramsbottom-Thrutch can now return to his university post and hold forth with dry-eyed vigour on any subject, no matter how potentially distressing. The party went rather too well but we are all feeling better now. We know that he will visit us in the future and continue his valuable research into the Doc Barbara Phenomenon.

Posted by Barbara Daniels at 02:02