As her devoted followers in this newspaper know and as those who pass her in the street soon come to realise, Doc Barbara is not vain about her own personal appearance but is always sympathetic to the foibles of others. She has frequently heard women ask each other: "Does my bottom look fat in this?" and noted that the friend always answers negatively. Also she has learned that such people buy expensive devices like electronic bracelets to check on their daily health, number of steps taken and general amplitude and has come to feel that this situation must be remedied. Appreciating that perpetual motion is the key and that one should never be seated during the day, she is in the middle of inventing a gadget which will encourage this.

The process is yet to be completed but the item will consist of a drawing pin attached to a low-slung ribbon worn round the hips with the pin at the rear so that the wearer is alerted when s/he attempts a sedentary posture. This widget, to be named the Fatbotsitnot, will be given away free but users are invited to make a donation to her current favourite charity: The Society for the Increase of frog Numbers. (Those who observe the lower case 'f' will recall that amongst Doc Barbara's few faults is slight xenophobia). We do not have a photograph of the Fatbotsitnot as yet but our cub reporter (who will keep using his initiative despite our warnings) has provided us with an image of one swan demanding of another: "Does my backside look big like this?" 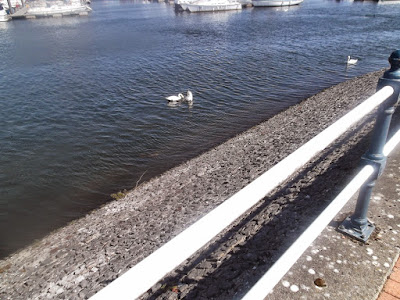 Posted by Barbara Daniels at 02:10