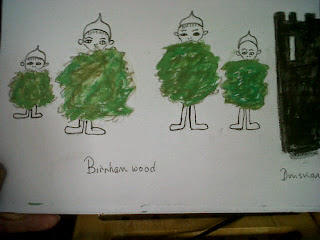 Despite Doc Barbara's evident admirable qualities this newspaper has to admit she has her critics, one of whom is the cynical editor of our sister paper, The Brynbuga Beagle. He challenged her to paint one of the prophecies from Macbeth and sent his own photographer to capture the result. She chose the one which promised security to the eponymous hero until a wood came to his castle: as we all know, the enemy cut down branches and carried them to disguise their numbers. When asked about her primitive canvas, she replied that she always thought there was an element of Dad's Army about this section of the drama. We must try her with something more imaginative and we do not rate his photographer either.
Posted by Barbara Daniels at 22:47